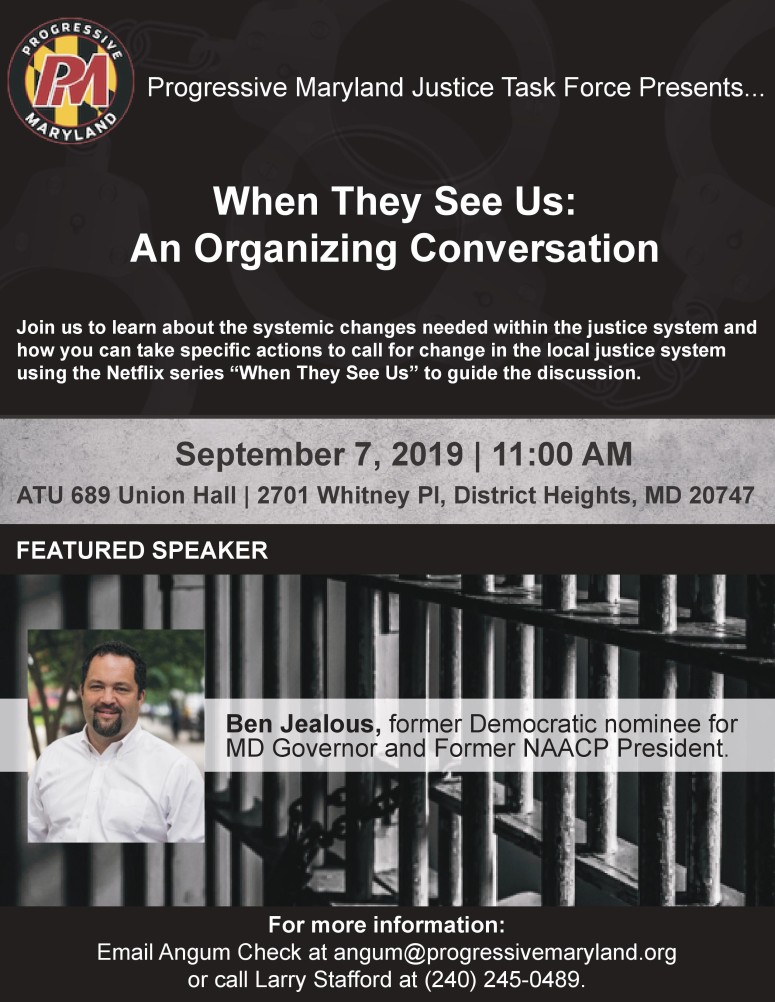 In our country’s history white supremacy and racism are much bigger issues than just a few men in white hoods raising torches under the cover of night. Long standing structural and policy forces have manufactured a system that destroys lives far beyond the capabilities of any individual racist or white supremacist organization. In 1989, after the tragic murder of a young woman Trisha Meili in New York’s Central Park, 5 young men were wrongfully accused and then imprisoned for a crime that they did not commit. This year the Netflix series When They See Us brought this tragic case back into the public dialogue, and with it has re-animated a discussion on the horrific flaws in our criminal legal system.

Join Progressive Maryland and 2018 Gubernatorial nominee Ben Jealous for an organizing conversation. Together we’ll discuss the issues in our criminal justice system in the context of this case and the current realities of structural racism in our criminal legal system.

The issues that the show raises are unfortunately still very relevant today. Beyond the specifics of the case, the story represents the way in which state prosecutors can bend the law, public opinion, and juries to their will all for the sake of etching out a petty victory. Today, prosecutors still wield great power within a system that is defined by a grotesque history of race based criminalization. Policies like cash bail keep far too many Black and Brown people of our state in jail despite no determination of guilt or innocence, and minor drug possession arrests can turn into a lifetime with a criminal record and broken potential.

In Maryland we can do our part to make sure that we fight white supremacy and structural racism by breaking the cycle of mass incarceration. We’re calling on Progressive Marylanders to join us to tackle this issue at the local and state level. In Prince George’s County we are working to push for change in the County State’s Attorney’s office. We are calling for an end to the prosecution of minor marijuana possession, an end to the use of cash bail, and to end the prosecution of youth as adults. Fortunately, with a new State’s Attorney who is already taking steps to improve how youth are treated, we have hope that we can greatly reduce incarceration and recidivism in Prince George’s. However, there is much work to do.

We need you in this fight to not only stand against interpersonal racism, but also to stand against structural racism and white supremacist policy in our state. RSVP here to join us as we organize to end mass incarceration on September 7th.

If you believe you received this message in error or wish to no longer receive email from us, please unsubscribe.