Dear Andrew Benson,
On July 18th, inside the Russell Senate Office Building Rotunda, 70 Catholic leaders locked arms in an act of nonviolent civil disobedience in an effort to put pressure on the Administration and to end the immoral and inhumane treatment of immigrant children held in detention. Over 100 Catholic organizations sponsored the Catholic Day of Action for Immigrant Children which brought together more than 200 Catholic sisters, priests, brothers and lay Catholic advocates who sang, prayed, and chanted as they held banners and signs demanding “Stop the Inhumanity.” This action is the beginning of a campaign in which Catholic leaders are increasing their willingness to take significant risks as an act of faithful resistance.

Help us keep the momentum going with your donation 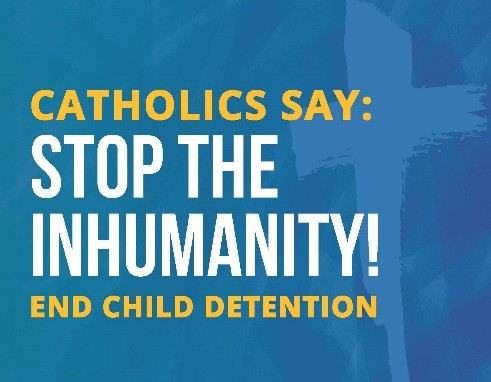 The Franciscan Action Network and the entire Franciscan family were instrumental in planning the event as together we advocated for children at the border both here in Washington, D.C. and across the country. Some highlights:

FAN Institutional Members, the Holy Cross Sisters in Wisconsin have taken out a billboard in Merrill, WI depicting a family behind a fence with the words, “With liberty and justice for all” printed. It’s slated to post in August.

We want to thank all of our members and friends who reached out to us last week about our day of action. Your prayers of support were felt among the 70 arrested and the hundreds gathered to rally at the Capitol. We heard from Franciscans all over the country who are turning their faith into action: Our hearts are full of gratitude to God and to all those who helped make the day a success. We look forward to more actions in support of our immigrant sisters and brothers, especially the children.

For those of you who are able to offer more than prayers, please consider a monthly recurring donation to the Franciscan Action Network.

Together, as an entire Franciscan family we can speak out against the inhumanity at the border and advocate to end immigrant child detention.
Peace and All Good,
Patrick Carolan
FAN Executive Director

If there was ever a time to share, this is it!