As this saga of the future of the Venezuela Embassy in Georgetown continues to unfold, history will record this as a key turning point in U.S.-Venezuela relations 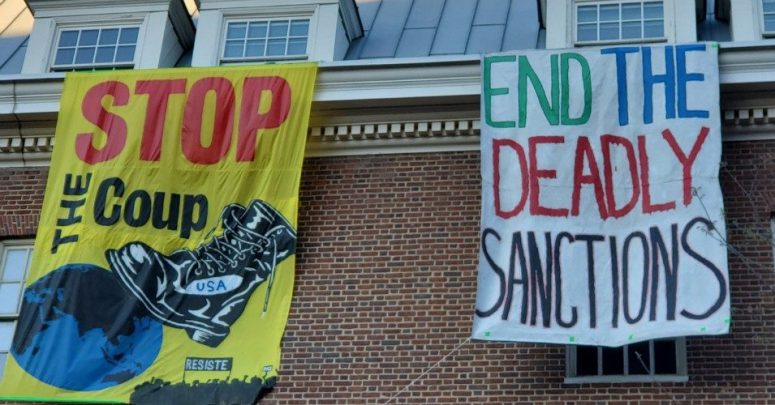 An extraordinary set of events has been unfolding at the Venezuela Embassy in Washington DC, ever since the Embassy Protection Collective began living at the embassy with the permission of the elected government of Venezuela on April 10 to protect it from an illegal takeover by Venezuela’s opposition. The actions of the police on the evening of May 13 added a new level of drama.

Since the cutting off of electricity, food and water inside the embassy has not been enough to force the collective to leave, late Tuesday afternoon, the Washington, D.C. Metropolitan Police handed out a trespassing notice that was printed without letterhead or signature from any U.S. government official.

The notice said that the Trump administration recognizes Venezuela opposition leader Juan Guaido as the head of the government of Venezuela and that the Guaido-appointed ambassador to the United States, Carlos Vecchio, and his appointed ambassador to the Organization of American States (OAS), Gustavo Tarre, were to determine who is allowed into the Embassy. Those not authorized by the ambassadors were to be considered trespassers. Those inside the building were “requested” to depart the building.

The notice appeared to have been written by the Guaido faction, but was posted and read by the DC police as if it were a document from the U.S. government.

The police taped the notice to the doors all around the Embassy and later called in the fire department to cut the lock and chain that had been on the front door of the Embassy since diplomatic relations were broken between Venezuela and the United States on January 23.

Adding to the drama, supporters of both sides began to gather. The pro-Guaido forces, who had erected tents around the perimeter of the embassy and had set up a long-term encampment to oppose the collective inside the building, were ordered to take down their encampment. It seemed as though this was part of moving them from outside the embassy to the inside.

Two hours later, some members of the collective inside the embassy voluntarily left to reduce the load on food and water, and four members refused to obey what they considered an illegal order to vacate the premises. The crowd waited in anticipation of the police going inside and physically removing, and arresting, the remaining collective members. The pro-Guaido forces were jubilant, crying “tic-toc, tic-toc” as they were counting down the minutes before their victory.

In a remarkable turn of events, however, instead of arresting the collective members who remained inside, a lengthy discussions ensued between them, their lawyer Mara Verheyden-Hilliard and the DC police. The discussion focused on the reason collective members were in the Embassy in the first place—trying to stop the Trump administration from violating the 1961 Vienna Convention on Diplomatic and Consular Facilities by turning over the diplomatic premises to a coup government.

Collective members reminded police officers that following illegal orders does not protect them from being charged with criminal actions. 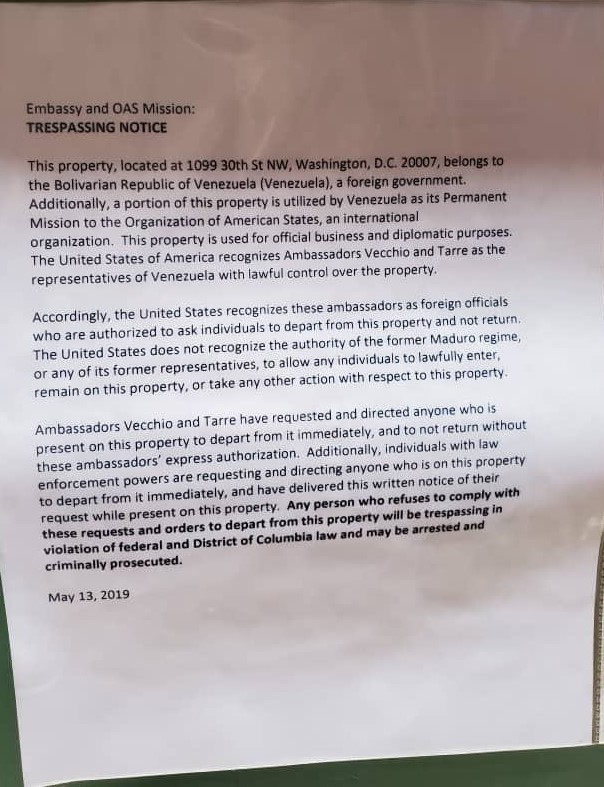 BREAKING: authorities just taped this ‘trespassing notice’ onto the Venezuelan embassy. It orders all those inside to leave immediately and threatens arrest to those who refuse to comply with orders.

This is illegal under international law!

After two hours, instead of arresting the collective, police turned around, locked the door behind them, posted guards and said they would ask their superiors how to handle the situation. The crowd was stunned that the State Department and DC police, after having over a month to organize the eviction, had begun this operation without a full plan to include arrests warrants in case the Collective members did not vacate the building voluntarily.

Kevin Zeese, a Collective member, wrote a statement concerning the status of the Collective and the Embassy:

This is the 34th day of our living in the Venezuelan embassy in Washington, DC. We are prepared to stay another 34 days, or however long is needed to resolve the embassy dispute in a peaceful way consistent with international law…Before doing so, we reiterate that our collective is one of independent people and organizations not affiliated with any government. While we are all US citizens, we are not agents of the United States. While we are here with permission of the Venezuelan government, we are not their agents or representatives…  The exit from the embassy that best resolves issues to the benefit of the United States and Venezuela is a mutual Protecting Power Agreement. The United States wants a Protecting Power for its embassy in Caracas. Venezuela wants a Protecting Power for its embassy in DC.

The Embassy Protectors will not barricade ourselves, or hide in the embassy in the event of an unlawful entry by police. We will gather together and peacefully assert our rights to remain in the building and uphold international law. Any order to vacate based on a request by coup conspirators that lack governing authority will not be a lawful order. The coup has failed multiple times in Venezuela. The elected government is recognized by the Venezuelan courts under Venezuelan law and by the United Nations under international law. An order by the US-appointed coup plotters would not be legal… Such an entry would put embassies around the world and in the United States at risk. We are concerned about US embassies and personnel around the world if the Vienna Convention is violated at this embassy. It would set a dangerous precedent that would likely be used against US embassies… If an illegal eviction and unlawful arrests are made, we will hold all decision-makers in the chain of command and all officers who enforce unlawful orders accountable… There is no need for the United States and Venezuela to be enemies. Resolving this embassy dispute diplomatically should lead to negotiations over other issues between the nations.

We anticipate that the Trump administration will go to court today, May 14 to request an official U.S.-government order to remove the Collective members from the Venezuelan Embassy.

Members of the National Lawyers Guild wrote a statement challenging the Trump administration’s handing over of diplomatic facilities to unlawful persons:

The undersigned write to condemn the violations of law which are occurring at the Venezuelan Embassy in Washington D.C. and to demand immediate action be taken. Prior to April 25, 2019, a group of peace activists were invited to the Embassy by the government of Venezuela—recognized as such by the United Nations—and continue to be lawfully on the premises.

Nonetheless, the United States government, through various law enforcement agencies, have condoned and protected violent opponents in support of an attempted siege of the Embassy. In so doing, the U.S. government is creating a dangerous precedent for diplomatic relations with all nations. These actions are not only illegal, but they put embassies around the world at risk. […]

The contempt shown by the Trump Administration for these principles and for international law puts at risk the entire system of diplomatic relations which could have a reverberating effect in nations throughout the world.

The undersigned demand that the United States immediately cease its ongoing state-sponsored assault and illegal intervention in Venezuela and against its government, which continues to be recognized by the United Nations and the majority of the world. We demand that local and federal law enforcement immediately refrain from exposing the peaceful invitees and their supporters inside and outside the Embassy to harm in violation of their fundamental human rights.

As this saga of the future of the Venezuela Embassy in Georgetown continues to unfold, history will record this as a key turning point in U.S.-Venezuela relations, U.S. violation of a key tenet of international law and most of all, as a heroic example of US citizens doing everything in their power–including going without food, water and electricity and facing daily assaults by the opposition—to try to stop a US-orchestrated coup.

Our work is licensed under a Creative Commons Attribution-Share Alike 3.0 License. Feel free to republish and share widely.

Medea Benjamin, co-founder of Global Exchange and CODEPINK: Women for Peace, is the author of the new book, Inside Iran: The Real History and Politics of the Islamic Republic of Iran. Her previous books include: Kingdom of the Unjust: Behind the U.S.-Saudi Connection; Drone Warfare: Killing by Remote Control; Don’t Be Afraid Gringo: A Honduran Woman Speaks from the Heart, and (with Jodie Evans) Stop the Next War Now (Inner Ocean Action Guide). Follow her on Twitter: @medeabenjamin

Ann Wright is a 29 year US Army/Army Reserves veteran who retired as a Colonel and a former US diplomat who resigned in March, 2003 in opposition to the war on Iraq.  She served in Nicaragua, Grenada, Somalia, Uzbekistan, Kyrgyzstan, Sierra Leone, Micronesia and Mongolia.  In December, 2001 she was on the small team that reopened the US Embassy in Kabul, Afghanistan.  She is the co-author of the book “Dissent: Voices of Conscience.“  (www.voicesofconscience.com)