Colombian peace community attacked: take action now for strong US condemnation and action to make sure these kinds of attempts stop! 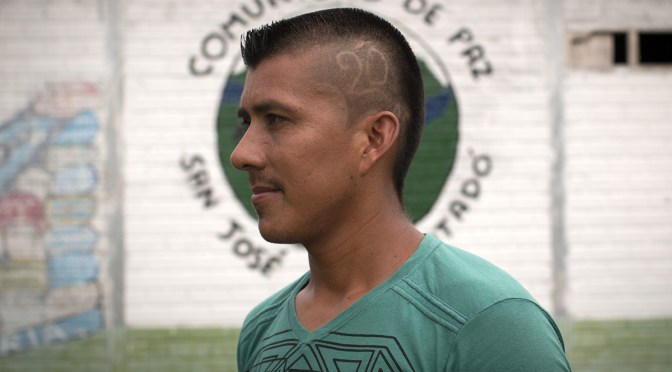 At 10:15 AM on Friday December 29th, four paramilitaries entered the Peace Community of San JosÃ© de ApartadÃ³ in Colombia and tried to assassinate GermÃ¡n Graciano Posso, the legal representative of the community.The attack took place in a community store and luckily, other unarmed community members present were able to fight off the armed attackers. Two paramilitaries were detained by the community, handed over to the Ministry of the Interior and then to the FiscalÃ­a (Prosecutor/Attorney General’s office). Two paramilitaries escaped. However, reports now claim those who were arrested have already been released.

The Peace Community was founded twenty years ago, in the midst of violence, forced displacement and killings. It is ï¿½ a space of non-violent resistance by small-scale farmers and has become emblematic of the civilian population’s collective struggle to separate itself from Colombian armed conflict. One of the most notorious massacres that impacted the Peace Community took place February 21, 2005, when eight people were murdered and dismembered in the villages of Mulatos and La Resbalosa, including three minors andCommunity leader Luis Eduardo Guerra.

This most recent attack is incredibly alarming. It is emblematic of the ongoing systematic targeting of activists and communities in Colombia who strive to build nonviolent futures. GermÃ¡n Graciano Posso, whose life was threatened in the attack, has already lost thirteen members of his family during the armed conflict, including his father and two brothers.

Take action now to condemn this attack and assassination attempt.

This assassination attempt comes just weeks after the assassinations of Mario CastaÃ±o and HernÃ¡n Bedoya, both of whom were land rights leaders in the Bajo Atrato region.

These systematic attacks and threats on community leaders, as well as the increased presence of (neo)paramilitaries, continue to occur despite a heavy military presence. For example, there is a constant military presence on the road to the San JosÃ© Peace Community and in the surrounding area. Continued paramilitary attacks point to the (US funded) militaryâ€™s dereliction of duty and/or military collaboration with paramilitaries.

At a time when the Colombian government is supposed to be implementing peace processes, human rights defenders and peace communities should be feeling increased safety and experiencing fewer threats and violence. ï¿½ As we have noted far too many times this past year, there were over 100 threats and assassinations of social leaders in Colombia in 2017 alone. Since the Colombian government signed the US-backed Peace Accords with the FARC, assassinations of community leaders not only are continuing, but seem to be increasing. According to Father Javier Giraldo, SJ, one of the most vocal advocates for the peace community, â€œThe paramilitaries are trying to take control of the territories that the FARC guerrillas have left during the current demobilization process.â€ Assassinations largely targetactivists who are working towards communal change and protecting their territory, crops and livelihoods. And as the lives of social leaders in Colombia are in constant peril, more broadly, so is peace itself.

Itâ€™s imperative that we maintain political pressure to end the saga of violence thatâ€™s plagued Colombian activists and peace communities throughout the countryâ€™s history of conflict.

The Witness for Peace Colombia Program