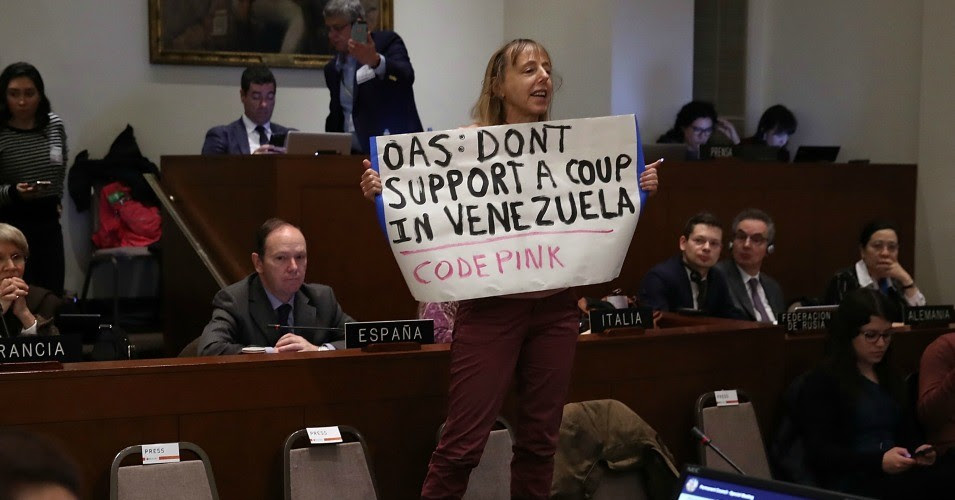 Last Thursday, an Open Letter to the United States, signed by Noam Chomsky and 70 scholars on Latin America, political science, and history as well as filmmakers, civil society leaders, and other experts, was issued in opposition to ongoing intervention by the United States in Venezuela. The letter begins:

“The United States government must cease interfering in Venezuela’s internal politics, especially for the purpose of overthrowing the country’s government. Actions by the Trump administration and its allies in the hemisphere are almost certain to make the situation in Venezuela worse, leading to unnecessary human suffering, violence, and instability.”

Read the Open Letter and then take action.

The Alliance for Global Justice is asking people to tell your elected officials that you oppose foreign intervention in Venezuela’s internal affairs. This action is counter to both the United Nations and Organization of American States Charters and thus illegal under international law.

The U.S. Peace Council “calls upon the US peace movement to not limit itself to just signing petitions and issuing statements of condemnation, as important as they are” and urges people to organize broad mass protests in every corner of the country, against war, against foreign intervention, and against violations of UN Charter.

Looking ahead…. On April 4, NATO will be “celebrating” its 70th anniversary in Washington, DC. April 4 also marks the 51st anniversary of Dr. Martin Luther King Jr.’s tragic and untimely assassination and the 52st anniversary of his prophetic speech, “Beyond Vietnam: A Time to Break Silence”. Many UFPJ member groups and allies are planning No to NATO – Yes to Peace events in DC, March 30 – April 4. Click here for more information and a calendar of events.

Thank you for speaking out,